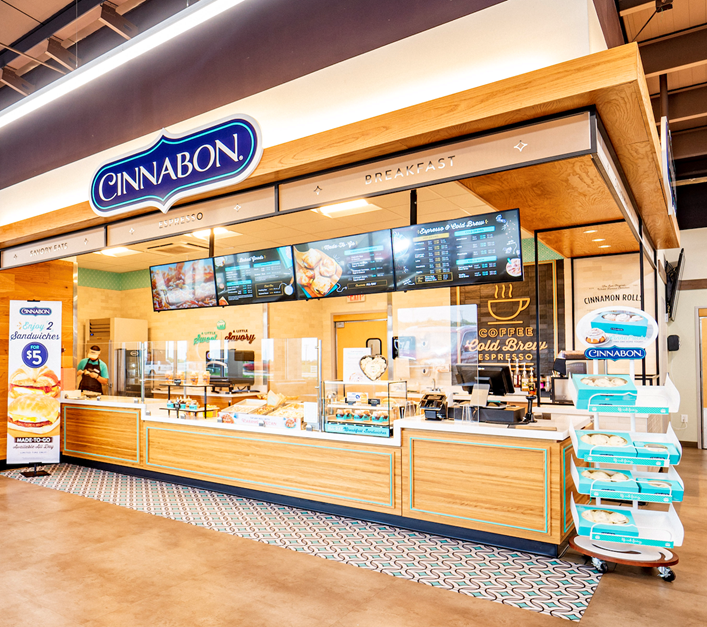 EG Group has partnered with Cinnabon, the iconic US bakery and purveyor of craveable cinnamon rolls, baked goods, and delicious signature beverages, to open the brand’s newest bakery on 4 December at Frontier Park in Blackburn. Additional bakeries are set to open their doors as early as January 2021.

“Cinnabon is a well-recognised and enjoyed brand,” said EG Group’s Food & Beverage Director for Europe, Mohammed Tayab. “We are delighted to be able to serve our UK customers with delicious, freshly baked products when they want to treat themselves. EG Group has once again partnered with another global brand, bringing the ultimate convenience to customers.”

The freshly made Cinnabon dough will be produced from scratch at a central kitchen in Frontier Park, Blackburn, and distributed daily to Cinnabon stores within EG Group locations. The dough will then be hand-rolled and baked in store. The state-of-the art production facility will support up to 50 stores with daily deliveries of fresh dough. EG Group plans to open 150 stores over the next 5 years across the UK, creating up to 2,000 jobs nationwide.

“We are delighted to be returning to the UK to deliver our Cinnabon product to our UK fans.  Focus Brands International has been working closely with the team at EG Group to be able to deliver the world’s most famous cinnamon roll and provide a moment of sweet escape for UK residents and travellers,” said Sean Wooden, Vice President, Managing Director at Focus Brands EUMEA.

At the new Cinnabon bakery location, guests can enjoy the famous aroma of warm dough and cinnamon, along with ooey-gooey™ treats including Classic Cinnamon Rolls®, which are baked oven fresh with Makara® cinnamon and brown sugar and topped with signature cream cheese frosting, as well as the MiniBon®, a smaller version of the Classic Roll. Cinnabon also offers a full line of made-to-order blended beverages, including the Mochalatta Chill® and Cinnamon Roll Chillatta®.