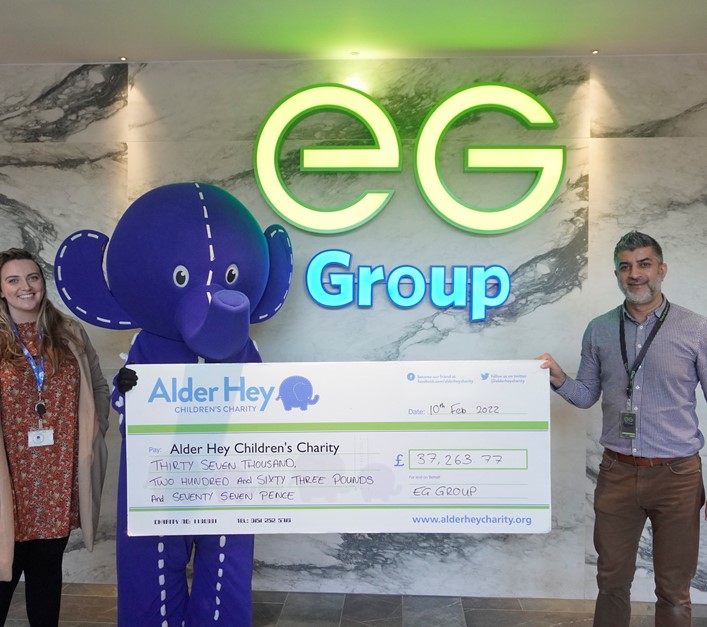 EG GROUP RAISES OVER £37,000 TO SUPPORT THE CARE OF CHILDREN ACROSS THE COUNTRY

EG Group is pleased to announce that it has raised over £37,000 for Alder Hey Children’s Charity to support the care of children from across the country.

Over four months, EG Group collected funds in sites across the country from generous members of the public, held fundraising events at the Head Office in Blackburn, and supported colleagues who took part in external challenges. Colleagues at head office enjoyed a cake sale, with delicious treats donated by the recently EG Group acquired Cooplands, the UK’s second-largest bakery chain.

Colleagues from across the UK also took part in a winter raffle, which the grand prize including an overnight stay for two at the Liverpool Titanic Hotel, and tickets to the British Music Experience Museum. Paul Elliott, Area Manager at EG Group alongside his wife Keli, completed the Yorkshire Three Peaks challenge in one day to also raise funds for the charity.

The money raised during the partnership will ensure that the 330,000 children Alder Hey see each year continue to have access to the best facilities and equipment.

At the heart of the fundraising campaign was four-year old Theo, who at just eight days old was rushed to Salford Royal Hospital by paramedics after almost turning blue at home due to a previously undetected heart condition. He was unresponsive when he arrived and staff struggled to stabilise him. Theo was placed on life support, had his bloods taken and was sent for an x-ray which showed he had an enlarged heart.

He was then transferred to Alder Hey Intensive Care Unit for assessment by cardiac specialists. Further tests showed that Theo had two holes in the heart walls separating the upper and lower chambers, as well as a rare heart defect that prevented oxygenated blood leaving the heart and travelling to other parts of the body

At just 12-days old, Theo underwent a ten-hour operation to rebuild his heart but his recovery included problems leading to a further three month stay in hospital. Four months later, he was admitted again after contracting a virus and spent three months on life support. Theo recovered and was discharged though he still travels regularly for appointments at Alder Hey.

“We are very proud to have supported Alder Hey Children’s Charity and raise such a significant amount of money. We are grateful to both colleagues and customers for supporting and generously donating towards the campaign and the funds raised will enable the hospital to continue to provide the many children like Theo who come from across the country with the amazing care they receive at Alder Hey.”

“It has been a pleasure working with EG Group to raise money for Alder Hey Children’s Charity. We are so grateful for everyone who has fundraised, donated and taken part in all of the different activities. The final amount has wowed us and we are so thankful to everyone!”